United Kashmir People’s National Party UKPNP celebrated it's 33rd Foundation day on 10 April 2018 in #Bagh#.The ceremony was presided by known journalist and president ukpnp bagh Yousaf kashmir and renown thinker sardarishtiaqhusain was the chief guest of the event. He gave a  brief introduction of the party and life of it's founder chairman also highlight the events of those days when party came into existence. Salma Hameed conducted the stage. we all discussed the history of occupiers intrigues, aggression and the resulting surge of the virulent Islamic terror devastating the region at the present. We debated all movements in kashmir and changes of the past period and prospects also analysed. After seventy years of the cleavage of state of kashmir this ancient society rich civilization is ravaging with elements of barbarism rising their ugly heads. Actually these brutal forces of black reaction trying to blow society apart are mostly creations of elements deeply linked with the occupier state. Gimmickry of war and peace between india and Pakistan has proved to be a chicanery. Religious and sectarian hatreds are ripping apart the social fabric of these once relatively harmonious land.
United Kashmir People’s National Party is the only hope and opportunity to oppressedkashmir nation for United and peaceful struggle based on democratic principles cutting across these sectarian and religious chauvinisms to avenge the crimes of occupiers and being the process of reunification and independence of kashmir through a victorious national democratic revolution. This historic stride of Kashmiris shell archive the ultimate destiny of peace, prosperity and emancipation.
Weurgedbothindia and Pakistan to resume dialogue for the peaceful settlement of the Jammu and Kashmir conflict which is beneficial for the People of Pakistan and India as well as the citizen of Jammu and Kashmir.
We all UKPNP leaders, Members, activists, sympathizers extended our gratitude, good wishes, and congratulations to Exiled Party Chairman for establishing a revolutionary Party 33rd years before which actually provides us  a leadership and guidance to accelerate our movement for the unification and complete independence of Whole Jammu and Kashmir. 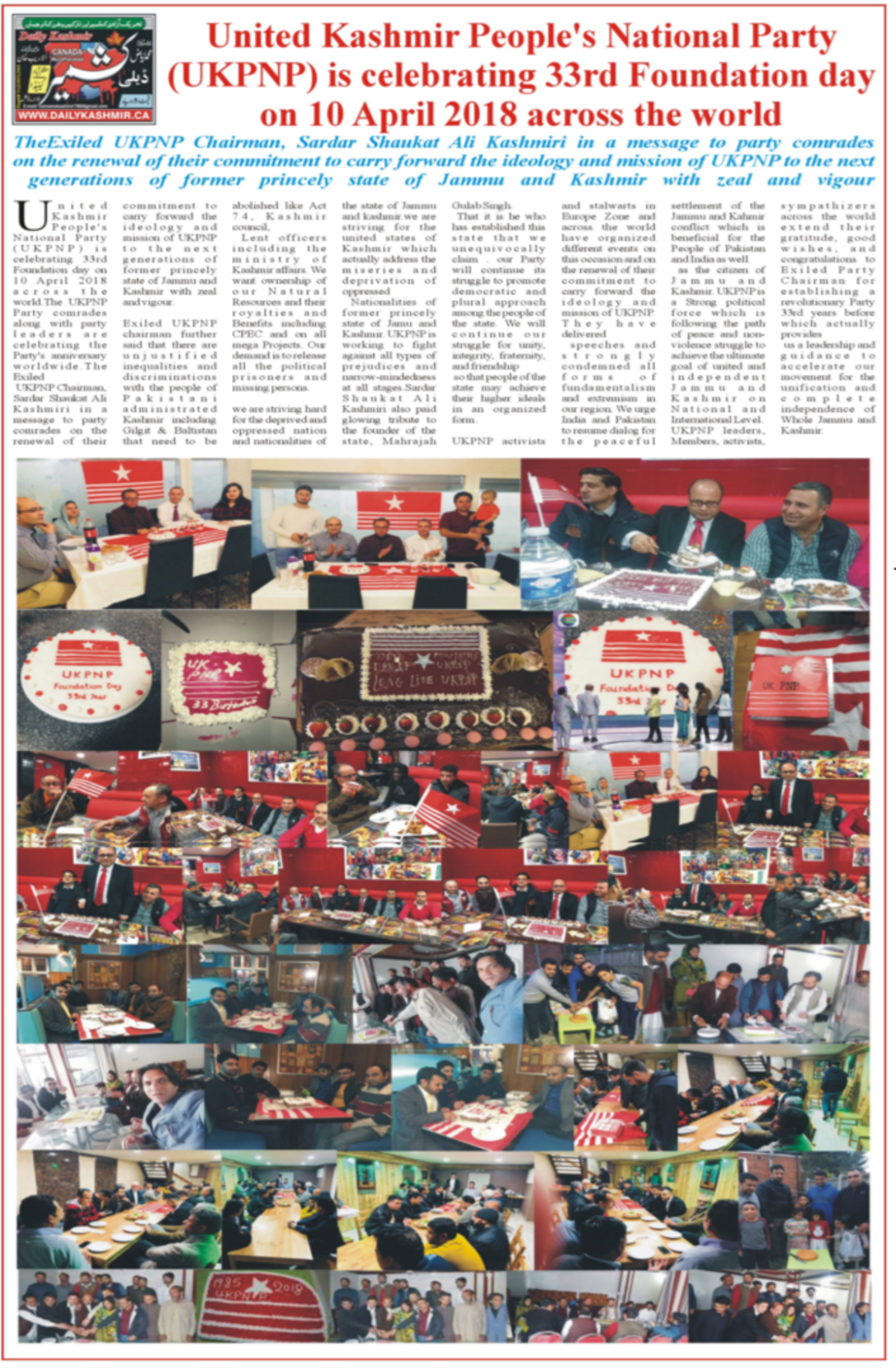 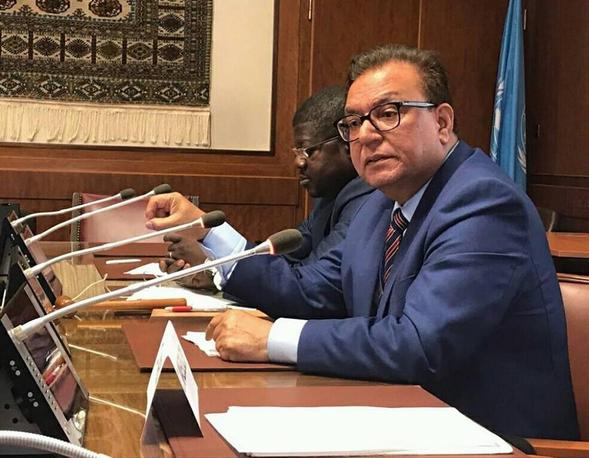 United Kashmir People's National Party (UKPNP) is celebrating 33rd Foundation day on 10 April 2018 across the world.The UKPNP Party comrades along with party leaders are celebrating the Party's anniversary worldwide. Former Secretary Foreign Affairs UKPNP, Jamil Maqsood has celebrated Foundation Day of UKPNP on 10 April 2018 and delivered a Special message along with Party Chairman at Bern.The Exiled UKPNP Chairman, Sardar Shaukat Ali Kashmiri in a message to party comrades on the renewal of their commitment to carry forward the ideology and mission of UKPNP to the next generations of former princely state of Jammu and Kashmir with zeal and vigour.

Exiled UKPNP chairman further said that there are unjustified inequalities and discriminations with the people of Pakistani administrated Kashmir including Gilgit & Baltistan that need to be abolished like Act 74, Kashmir council, Lent officers including the ministry of Kashmir affairs. We want ownership of our Natural Resources and their royalties and Benefits including CPEC and on all mega Projects. Our demand is to release all the political prisoners and missing persons.

we are striving hard for the deprived and oppressed nation and nationalities of the state of Jammu and kashmir.we are striving for the united states of Kashmir which actually address the miseries and deprivation of oppressed Nationalities of former princely stateofJamu and Kashmir. UKPNP is working to fight against all types of prejudices and narrow-mindedness at all stages. Sardar Shaukat Ali Kashmiri also paid glowing tribute to the founder of the state, Maharajah Gulab Singh. That it is he who has established this state that we unequivocally claim. our Party will continue its struggle to promote democratic and plural approach among the people of the state. We will continue our struggle for unity, integrity, fraternity, and friendship so that people of the state may achieve their higher ideals in an organized form.

UKPNP activists and stalwarts in Europe Zone and across the world have organized different events on this occasion and on the renewal of their commitment to carry forward the ideology and mission of UKPNP. They have delivered speeches and strongly condemned all forms of fundamentalism and extremism in our region. We urge India and Pakistan to resume dialog for the peaceful settlement of the Jammu and Kashmirconflict which is beneficial for the People of Pakistan and India as well as the citizen of Jammu and Kashmir. UKPNP is a Strong political force which is following the path of peace and non-violence struggle to achieve the ultimate goal of united and independent Jammu and Kashmir on National and International Level.

UKPNP leaders, Members, activists, sympathizers across the world extend their gratitude, good wishes, and congratulations to Exiled Party Chairman for establishing a revolutionary Party 33rd years before which actually provides leadership and guidance to accelerate our movement for the unification and complete independence of Whole Jammu and Kashmir.