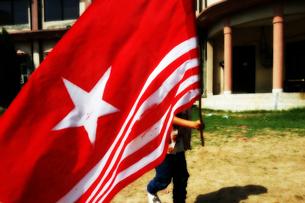 "Man is free at the moment he wishes to be."

"Freedom is the recognition of necessity."

United Kashmir Peoples National Party was founded on 10th April 1985. During these years the Party faced many ups and downs. It seems that in coming years some new trials and tests are in store for us to reach the destination. Our Party is struggling for higher ideals like national liberation, democratic set up, exploitation free and prosperous society in the former state of Jammu and Kashmir. These ideals demand lot of sacrifices. As such we are not afraid of such ordeals. With all the ordeals Party is determined to step forward and it has successfully advanced and organized since its inception.

To achieve the high ideals set forth practically, the Party has made intensive and close contacts with working class, poor peasants, women and students and people of all shades of opinion and social status. Party is working at different fronts for its ideals.

The Party is continuously struggling to organize the people of Jammu and Kashmir for their national liberation. But to strengthen the roots among general public and revolutionary sections, the revolutionary movement of our mother land must flourish from its soil.

In a neo-imperialist society, the concept of socio-political and economic emancipation is not an easy task. In all parts of the state of Jammu and Kashmir the people are living a life of utter poverty, unemployment and backwardness. They have no political and democratic rights. Particularly in Gilgit and Baltistan that are integral part of the state, the concept of election is still unknown. People there are still deprived of the right to vote.

Occupant forces and their agents are still playing their foul play in these regions. The resource of the state are being exploited and utilized by the occupying forces. The traditional conservative parties of the state equally share this exploitation. These parties work against the national interest and for their own interest. They promote tribal sectarian and regional prejudices for their own political and economic gains and motives. They instigate and fire the sentiments of general public to keep them politically disintegrated and economically backward.